Well, I’ve definitely learned something about myself this weekend. After I pass the initial excitement of a completed assembly, I have a hard time repeating all of those little boring steps to get the second one done.

The other half of this airplane isn’t going to finish itself, so let’s get to it.

A few weeks ago, I left off on the left aileron after having matchdrilled everything, so today, I got it all disassembled, and started in on the tedious crap.

Here are most of the parts (except the skin) after disassembly. Let's start prepping.

The nice thing on this second aileron is that I’ve already done everything once. 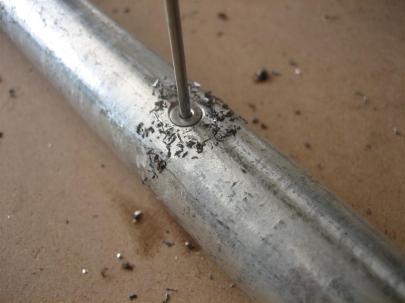 A little deeper than flush, as usual, to make plenty of room for the skin.

Oh yeah, I had forgotten to flute the nose rib between the two x’s, so I marked them with…well…x’s, so I wouldn’t forget to flute, then drill them as I was taking everything apart.

I clearly went a little overboard on the flute there. I "unfluted" a little before matchdrilling.

Then ( I guess I was bad at taking pictures today), I clecoed the skin back onto the counterbalance pipe, balanced the assembly on a 2×4 (which was part of my bending brake I had attached to my workbench), and dimpled using the die from my borrowed c-frame.

They all turned out great, like the ones on the right aileron.

Then, I got to deburring and dimpling. I worked on the ribs and reinforcement plates, leaving the spar and skins until another boring day.

One kind-of-boring hour tonight. Maybe the next few sessions will pick up.

Not much tonight. I put rivets in the remaining top skin holes and did some better inspection of the rivets we set a few days ago. All the rivets look great, but I’m less than perfectly content with some of my edges. The tank-top-skin seam has a really tiny step to it. I rolled the edge a little, but I probably could have gone a little more with it. Also, my very nice scarf joint turned out to not be perfectly flush either. It’s not anything I’m going to change, I’m just going to have to accept that I’m not going to win any awards.

Anyway, I put the rivets in and put a piece of tape over each one.

After 45 minutes of that, I grabbed my right outboard aileron bracket and decided to tackle the bad rivet and small gap.

It also cause the part to separate a little.

This is not acceptable.

After drilling out the two closest rivets… 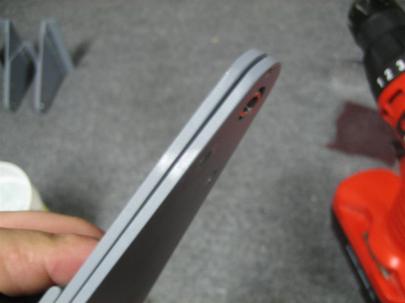 Anyway, I got a small clamp out….

And re-set those two rivets. 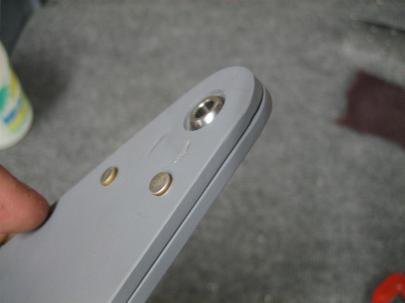 Shop heads look much better, and now there is no gap

Since I had scuffed up the parts a little while riveting, I shot a little more primer on everything. 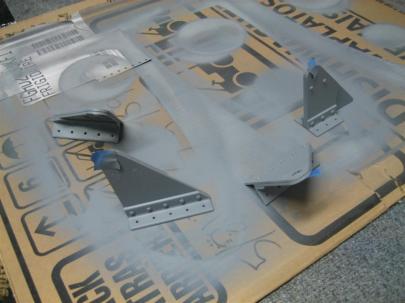 The blue tape is there to protect the bearing. Didn't want any paint on them.

1.0 hour today…pretty boring. Drilled two rivets out, but now I’m ready for Joe to come over and knock this wing out.

Well, I think Joe might be coming over tomorrow or early next week, so I figured I’d do a few things while I wait for his rivet-shooting expertise.

One of the things that slowed us down a little bit last time was putting the rivets in the holes and putting a piece of tape over each rivet head.

I know I’m not following the standard pattern, so don’t do what I do when you get to this step.

It took about 45 minutes, but now I have all the plans-reading, rivet-legend confusion out of the way. 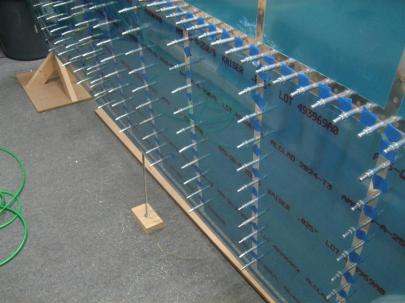 I'm going to be so excited when these top skins are done.

Looking for something else I could do, I grabbed some snap bushings and started putting them in all of the holes I’d drilled earlier. (Dear girlfriend, I know it is about 200°F outside right now, but MY beautiful picture of YOUR beautiful chili from that post is making me miss football season.)

A few snap bushings and the bags they came in.

While I’m doing that, I might as well feed this conduit in the 3/4″ hole in the ribs.

A piece of Van's conduit cut to length.

I probably could have gotten some from Lowe’s or something, but this stuff fit these 3/4″ holes perfectly. 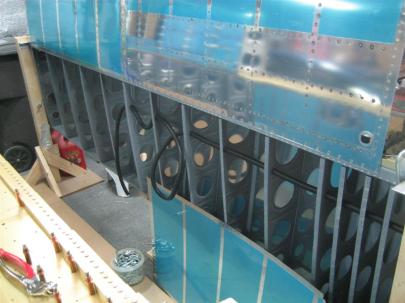 I was smart enough to start in the middle and work toward the inboard and outboard ribs. 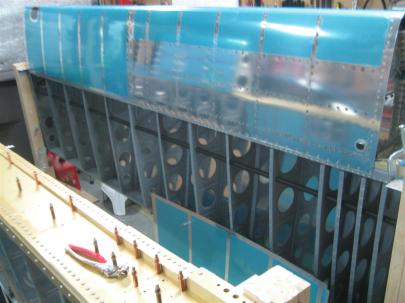 Here’s a closeup of both the snap bushings and the conduit. had to use the flash so you could see under there.

Ready for wiring anyone?

Of course, I didn’t tell you that I had to uncleco the lower outboard skin, so my last trick for the evening was to re-cleco it. I could have waiting until during our riveting session tomorrow so I didn’t have to go off and on again with the skin, but I’d rather waste my time than Joe’s. 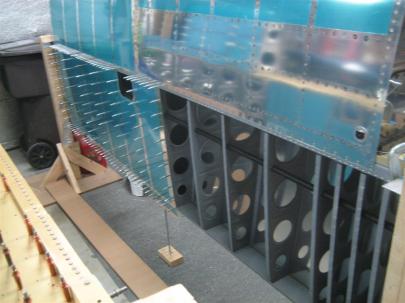 Well, not much tonight, except a complete lack of motivation. I move the right upper inboard wing skin over to the left wing (just to hang there) while I started deburring and dimpling the right wing ribs.

I decided to only deburr and dimple the upper side of the ribs. I’m going to leave the lower side as-is so I can 50% cleco the lower skin (when able) to the skeleton while riveting the upper skin in place.

Action shot of me dimpling the ribs.

I was planning to be out in the garage for an hour and a half, but my boredom got the best of me and I quit after a (hot) half hour.

I told you it wasn’t exciting.

Not much today, just more right wing main rib preparation. I thought I was going to be able to finish all the prep on the right main ribs, but I got distracted and only got a few of them prepped (and not even all the way to priming).

First, I opened up my two new packages of maroon scotchbrite pads. 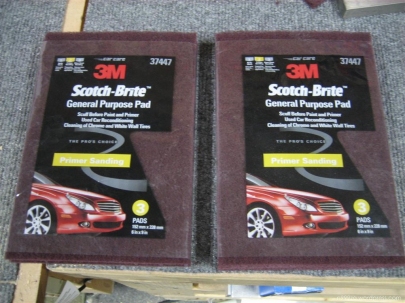 I cut one of the packages into my usual ~3″ squares. 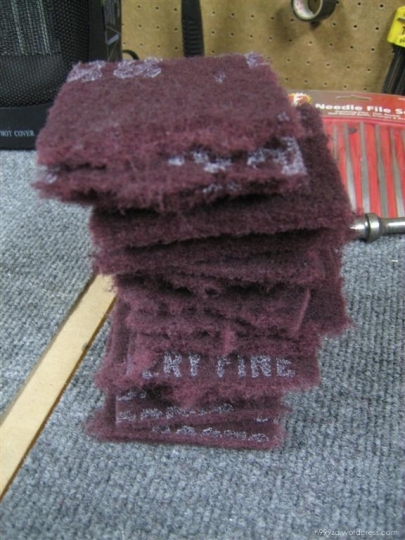 I can get 6 squares from one layer...that makes 18 squares. per package.

I don’t know if you can tell, but I usually try to find a little package of work that leaves me heading back inside with a nice sense of accomplishment. It worked really well last week to do three ribs in an hour, all the way to primed and ready to install.

Today, I was working on 7 ribs, and got all 7 deburred (holes only), and about 4 of them scotchbrited. 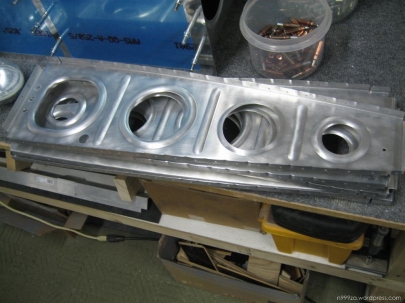 Stupid ribs. Taking up all of my build time.

Next session, finishing up the scotchbriting and then deburring the crevices, then hopefully priming.

Then, lucky me, I get to start on the left wing main ribs…

I prepped and primed 3 more ribs tonight. I had prepped R1 yesterday (I numbered R or L then from 1 to 14 starting at the inboard rib). Today, I got ribs R2-R4 done. So…

I HAVE ALL OF THE RIGHT WINGWALK AREA RIBS DONE, WUHOO!!!

(There are still 24 more main ribs to do, then 12 more leading edge ribs and probably 12 more tank ribs.)

R2, R3, and R4 just after being shot with some self-etching primer.

Today’s 3 ribs took me an hour.

At least I’m getting faster. (I’m not sure how many more ribs I can do in an hour, I was pretty efficient yesterday.)