That’s the answer to the question “Hey Andrew, are you building an airplane, or what?

Yes, yes. Of course I am. But, I am taking my time. Not out of “choice”, but out of “holy crap, there are eighteen thousand other things I have to do today”…which was the theme of the day for the last two weeks…

But, I can’t complain too much. Last weekend, I was in Chicago for Zanetoberfest, and just yesterday, the girlfriend and I headed up to Virginia to a winery.

What a hard life I lead!

Anyway, I promised myself (and my girlfriend…no more middle-seat once the airplane’s done, I promise!) that I would get a little bit done today.

So, I headed out to the garage, dusted off two weeks of non-activity, and got to work.

Last thing I had done was to (very successfully) drill the flap hinge to the left flap. It’s still a little long, though, so I need to trim it up a bit.

I know I’m going to use the “secure-in-the-middle” technique, so I used some snips (with a wide berth) to snip the soft hinge, but left the pin intact. Once I can get the wing flipped over, I can figure out which middle eyelet to remove and trim down this pin, but for now, it’s going back on the shelf as a whole until I can get it figured out.

Here's the hinge just after snipping. Notice the intact pin.

Then, We cleco on the top skin and start matchdrilling.

I had to do a little maneuvering to get the spacer lined up (the sandwiched thin spacer below), but I ended up getting it matchdrilled okay, too. 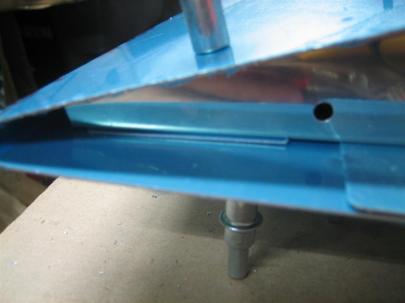 The shadows make these parts all look distorted, but I assure you, they are not.

I also found the AA6x125x1.5x2x10 (whoa, that’s a hell of a part number) and started marking some holes and lines for trimming.

I drew both up before trimming.

I didn't trim the shorter flange down yet. It's 1.5" now, and it needs to come down to 0.75", but I want to wait and see how everything lines up first.

After matchdrilling the three right-most (in the picture) holes from the spar, I flipped it over and drilled the five left-most holes from the angle. I had previously drilled those from markings to #40, so it was easy to drill everything up to #30 all at once.

Aluminum shavings. I've been missing you in my life.

The other portion of this support is delivered from Van’s as a straight piece. Due to the wing-to-fuselage geometry, the spar-to-rib angle is 6.3° or something. Really?

They show you where the bend line should be, so I marked it, then clecoed the only matched hole to the rib, just to make sure the line would be in the right place.

Of course, I didn’t take any pictures of my bending, but it worked just like everyone else; one side in a vice, the other side sandwiched between two pieces of wood. Then, some big-a55 pliers…a little finesse…Perfect. 6.3°? On the dot. 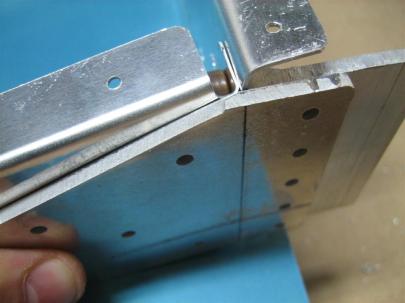 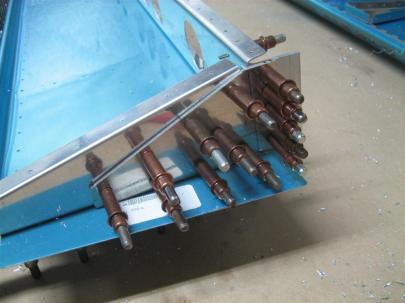 I haven't been building in a few weeks, but I think this is where I'm supposed to say "TADAAAAAA!"

1.5 hours. I hope this is the start of a string of building days. We’ll see.

Well, even though I haven’t been building over the last couple weeks, we have been having fun.

Today (which was actually before the post that just came out, sorry I know I got the posts backwards), the girlfriend and I hopped in the truck and started north.

A few years ago, we heard of a local (kind of) winery called Château Morrisette (yeah, I had to look that little “a” up…you type that thing by holding the alt key down and pushing 0226, when you let go a little â shows up!) I love being a nerd.

Anyway, Château (it’s so fun!! ââ) Morrisette has a dog theme, and everyone knows how much we like dogs. We also saw on the news that the leaves here are just past peak, and today’s going to be 65° (that one’s Alt-0176) out, severe clear blue skies. 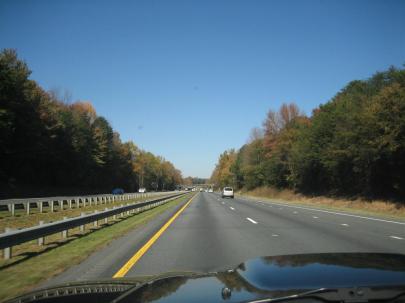 I can't remember where in VA we were at this point, but it's so pretty.

I'm pretty sure this is the Blue Ridge Parkway now.

This truck was going SOOOO SLOOOOW. (And we were okay with it, no rush, beautiful day.) 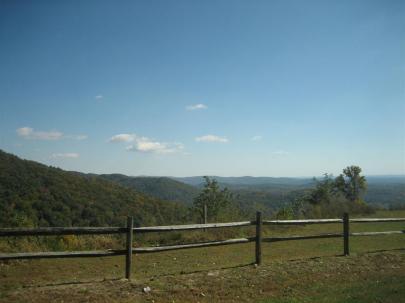 This is about an hour away. So pretty. There was some glare inside the car, so these pictures actually turned out better than it looked in real life. 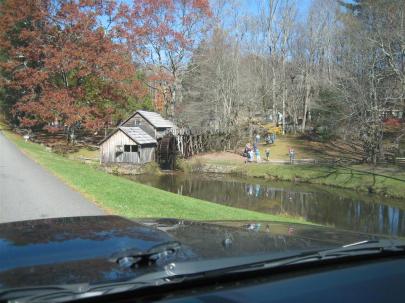 A little mill on the side of the road. On the way back, there were a ton of people milling around (pun intended) taking pictures, etc.

I need a piece of property up here.

The next five or so pictures were crap, so the next one you get is us walking up to the restaurant.

The usual sign picture. (Why do I always do that?) 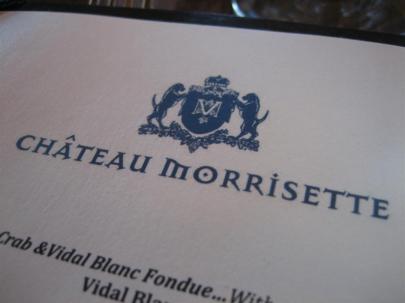 Apparently I do it with menus, too. 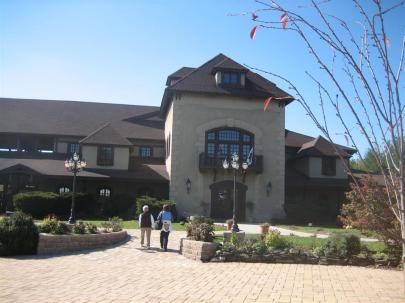 There wasn’t really much going on other than a thousand people trying to taste wine. And by “taste,” I mean “when do we get to move on to those sweet wines?”

[snob on] I love that the east coast has started making wines, and I’m all for wineries using locally productive (sometimes sweeter) grapes for wine, but if you cater to the local tastes (sweet, sweet, sweet), then the more global palette will think you only make sweet wines. The family next to us actually said “when do we get to move on to those sweet wines? I can’t drink that dry stuff.” [snob off]

Oops, I just called them out and they're in this picture. Sorry! 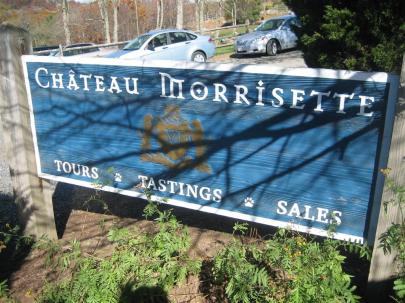 Our favorite? This Cabernet Franc. 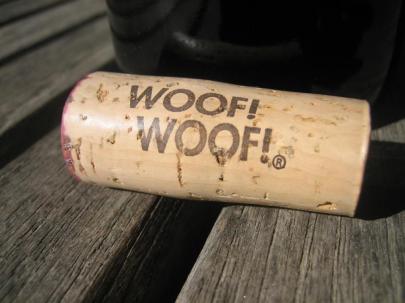 Umm picture of a parking lot?

Our dog's rule, too.

Then, we headed back, and we took a ton of random pictures.

Past the peak, my butt. It's gorgeous. 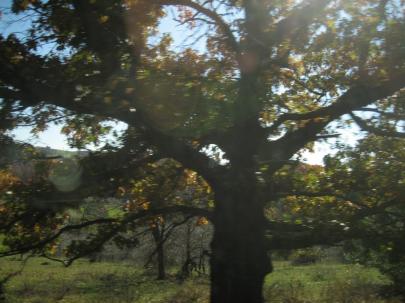 Seriously, I want some property up here. 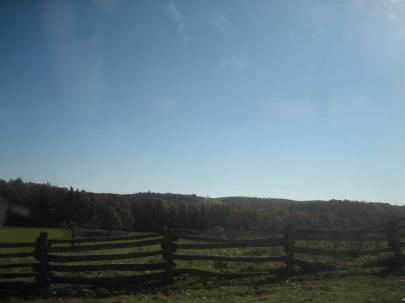 That grass is greener than mine. 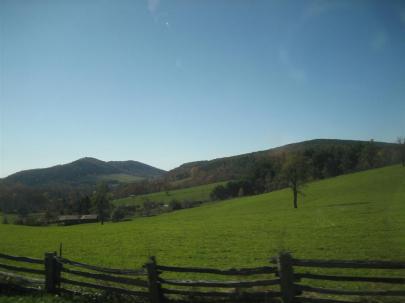 Finally starting to come down out of the mountains.

At least there's no one behind me. 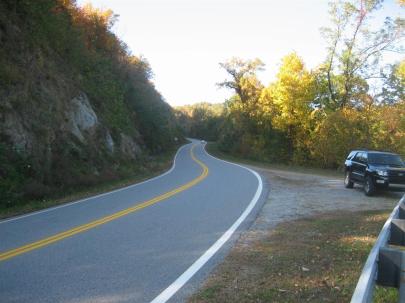 We stopped at a little lookout on the way down.

These next few photos are the best of the trip. 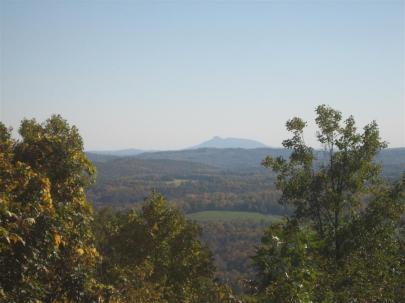 There's pilot mountain in the distance.

Okay, after all those pictures, this one is kind of boring.

Andrew, stop taking pictures and get back to building the airplane. Next time, you can fly there, (but not home…not until the next day). 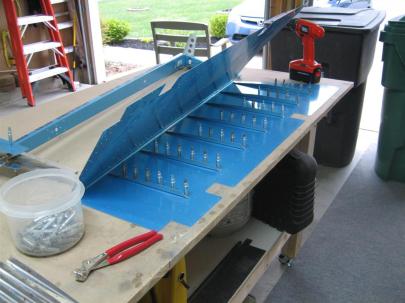 My setup for drilling stiffeners. I used the cordless today so I wasn't making too much noise. I'm almost done with this side.

I matchdrilled every hole except for the last hole (closest to the trailing edge.) Some of these last holes are both pre-punched, and just need to be matchdrilled to final size, and some are missing the holes in the stiffeners. You have to use the skin to matchdrill the stiffener.

Down the right elevator.

I unclecoed most of the stiffeners and then re-clecoed the stiffeners (just at the ends) with the elevator off of the table so I can roll it over to drill. 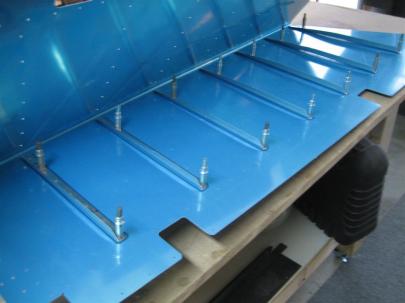 Ready to flip over and matchdrill those last stiffener holes.

One picture of the last hole. 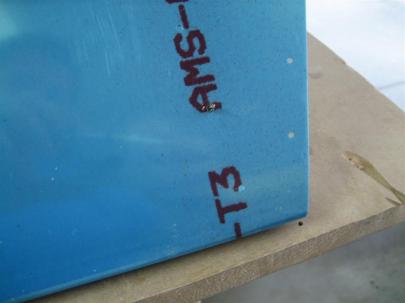 The hole at the end of the "3" is the one I need to matchdrill.

After that, I used a thick sharpie to trace the stiffeners to help with future devinyling. Then, I flipped the whole thing over to start on the other side. Same process, though. 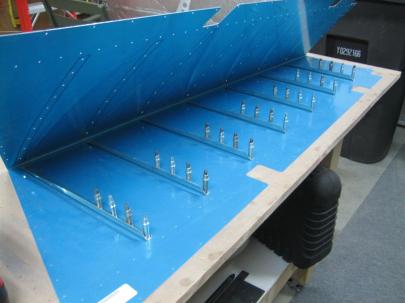 About halfway done with this side.

Then, uncleco from the table to flip over and get the last hole.

Unclecoing from the last hole.

No big deal for you, but I marked all of the stiffeners correctly. The right elevator in the background is sitting upside-down (I just typed right-side-up, and had to change it. See, I’m still confused). Anyway, the ones on the table are on the top surface of the elevator, but the one in the foreground is marked the top (“Top, A”), but is actually the longest bottom stiffener.

After finishing all of the stiffener drilling, I took them inside to deburr. After all of the deburring, I grabbed this shot of the placemat on the kitchen table. (Don’t tell the girlfriend. I got it cleaned up.)

Aluminum shavings galore after deburring. This is kind of a stupid picture, but I already uploaded it, so I'm not going to hold back.

After deburring, I rubbed down the surface that needed to be dimpled, (not the perpendicular surface, and I definitely didn’t do any edge-finishing). 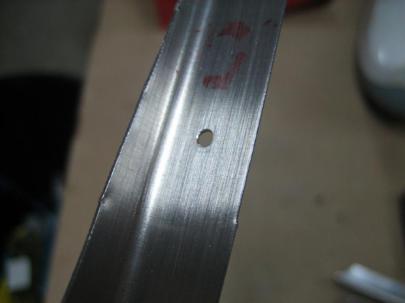 Deburred and scuffed, ready for dimpling.

And I would like to draw your attention to the following three dimples. Don’t they look lovely?

It was the girlfriend! 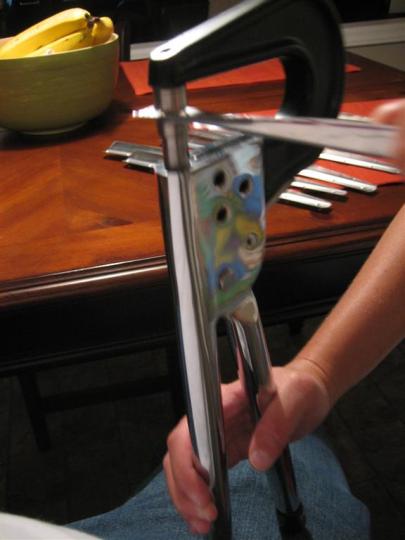 Girlfriend dimpling. (She kept giggling after each one. And after each time I said "dimple." There may or may not have been red wine involved.)

Anyway, she made it about 8 dimples before getting “bored” (I think her hands hurt, too). Back outside, I found this little guy.

No real identifying marks, but I’m sure someone will be able to help out.

Anyone have any ideas?

As if I hadn’t had enough drama for the night, Ginger came out, grabbed some wood, and took it inside to chew up all over our staircase landing. Here are some of the remnants.

It's better than her eating the window sills. Or the banister. Or our patio chairs. Or my soul.

Anyway, I spent a few more minutes with the Permagrit block rounding the edges of the stiffeners. Next up, edge-finishing with the scotchbrite wheel, scuffing, cleaning, and priming. Then, same dance with the skin and the backriveting!

An hour and a half. Boom shakalaka.