Hello everyone! I’m back! (But seriously, let’s not call it a streak or anything.)

I’ve had a lot of crazy things happen in my life (all of them positive…I’ll mention them eventually) that have been keeping me away from the garage, but today after a nice dinner with the fiancée, I decided a little garage time was in order. The other day, I spent a few hours cleaning off my workbench, so really, the next step was to take the clecoed flap apart, and start prepping it for final assembly.

Here’s the right flap as it’s been sitting for about 6 months.

As I was disassembling, I started to remember where I had left off. Oh yeah, I had done the two half-hinges trick, and had cut away some eyelets. 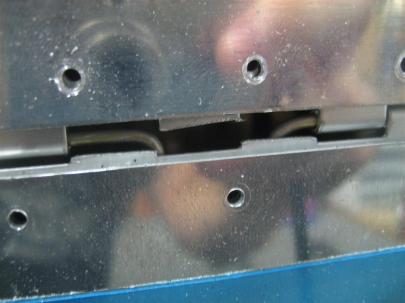 I’ll be sure to clean these up when I’m prepping the hinge.

I decided that instead of just deburring a whole bunch of parts, I wanted a nice little chunk of work. So, I grabbed the end ribs and the inboard rib’s reinforcement plate (I gotta go back and study the plans to start memorizing the part numbers again) and got to work deburring, dimpling, etc.

Here are the ribs I’m going to focus on tonight.

After standard deburring and dimpling where I could reach, I grabbed my 1″ steel bar with the countersunk hole in it and did my flush-set flush rivet dimple trick.

And, the final product.

Then, inside for some cleaning, and back outside for the artistry.

By “artistry,” I think I mean “I got more primer on the cardboard than the part.”

While those parts were drying, I continued disassembly of the other flap parts, including trying to remind myself of the controversy about the right flaps internal ribs not having their flanges mirror the flap plans. I kind of remember that all the left and right flap internal ribs were the same part number, meaning that they wouldn’t be mirrored.

Just a picture to help me remember where I got them from.

After a few short minutes, the end ribs were dry.

I forgot how much I love primed parts.

After I whipped out the Main Squeeze and some AN470AD4-5 rivets, I had a little mini assembly. Wuhoo!

Then, I checked the plans for the nutplate callout, and started looking through my rivet and nuts and bolts bins.

A couple flush rivets and a K1000-4 nutplate, and we’re in business. 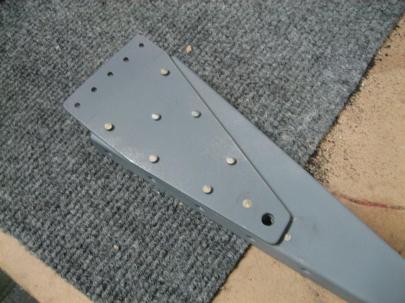 Just to show you it’s real, here’s the backside.

1.0 hour. 9 rivets. Not quite back on track yet, but at least still interested.

This entry was posted on Friday, July 20th, 2012 at 9:30 pm and is filed under Wings. You can follow any responses to this entry through the RSS 2.0 feed. You can leave a response, or trackback from your own site.