After a nice day off (had to work), I got back in the garage this morning for some good progress.

I started off by assessing the damage from the other day’s skin denting fiasco. I contemplated removing HS-707 entirely (from the top skin, too) so I could really get in there and smooth this sucker out. I even got everything mocked up in the c-frame again to look at the feasibility of getting rid of this dent. Then I decided I would have probably caused more harm than good, and that it looked a lot better today than it did the other day. After re-clecoing HS-708 into the skin with HS-707 and re-riveting the bottom skin to HS-707, I took this picture. The dented area is between the bottom two rivets in the picture. It’s really not that bad.

Anyway, with that done and behind me, I clecoed in the front spar assembly from Friday.

Upside-down HS assembly after starting to cleco the front spar (already riveted to the left HS skin) into the right HS skin.

CRAP! I forgot to remove the blue vinyl from the inboard bay before clecoing everything together. Okay, let’s un-cleco, remove, the vinyl, and recleco. Great. After inspecting (admiring, really) the assembly, I noticed a loose rivet (as opposed to a prude rivet. Hehe.). It was one of the two forward HS-707 rivets (by the denting). Grrr. Okay, should I un-cleco everything, and risk scratching everything in the process, or drill out two small rivets in the HS-404 to get my arm in there. I decided to go with drilling, since apparently I am really good at drilling rivets out. Without any issue, I got HS-404 removed and reached in to replace the offending rivet (second from the right in the picture).

HS-404 removed so I could reach in to replace the loose rivet.

Then, I reinstalled HS-404. (But took this picture before I actually riveted it to HS-702 (front spar) and HS-405 (aft root rib) behind the spar. Just pretend there are perfectly driven rivets there.

HS-404 reinstalled and the rest of the skin clecoed together.

Time to skin rivet. I like this part. Here is my technique. I stick the appropriate sized rivet in the hole, cover with blue tape, then reach in with the bucking bar, and shoot with my flush set, which is also covered in blue tape. Then, I remove the rest of the clecos, put rivets in again, and move all this little pieces of blue tape over one. (Then I figured out that on the second round, I could remove all the blue pieces of tape and run a whole line of tape along the line. I just had to make sure verify which rivets I had the bucking bar behind by pushing up on it a little. you can then see the rivet pushing up behind the tape. Bucking bar in place, I can set the gun down on the rivet and shoot.)

If you were counting, you noticed there are now two pieces of blue tape between the flush set and the rivet (and my fragile HS skin). This worked well for me, prevented further damage, and gave me some friction to help keep the set in place.

So, I knocked out all of the rivets needing to be bucked (I think it was 42 per side) before inspecting all my work for any issues. I think I found 5 skin rivets I wanted to replace. Here is a good example. The shop heads of all of these look great, but I want those rivets perfectly flush. I didn’t take an after picture (sorry), but I assure you, the one on the right now looks like the one on the left.

Bad rivet on the right. Replace.

After bucking all of those, I moved the now very big HS assembly to the floor while I cleaned off my workbench. Nice and clean again. 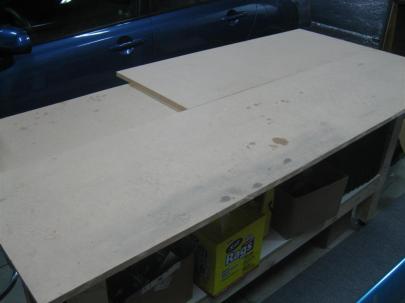 Then, I brought the HS back up on the table to squeeze the rivets that could be squeezed on the HS-601PP (skin) to HS-404 (inboard tip rib), HS-405 (inboard aft rib), and HS-706 (tip rib). The instructions have you leave 5 holes open on the inboard lines for the empennage fairing attach holes on the top only, but I decided to leave the same holes empty on the bottom for now, just to have clecos there on both sides to hold the HS off the table.  I also left some clecos in both sides of the tip ribs (although I left less on the right than I had on the left the other day, so I squeezed a few more on the left. ) Anyway, the HS is upside-down here. Left side is in the foreground. 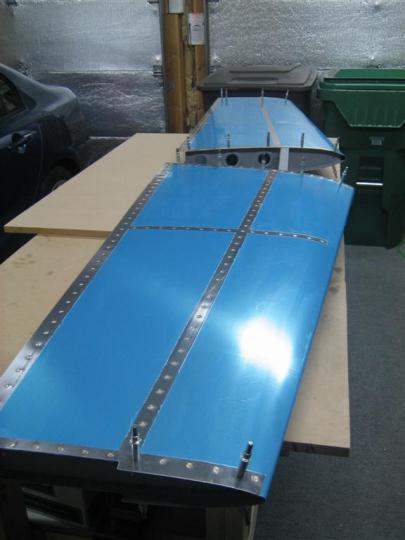 Another shot. Still need to get that rear spar done. Look in upper right side of the picture. The dented area (I really shouldn’t call it dented anymore) is in the middle of the leading edge there. (I know the picture is from a distance, but the point is it’s not that noticeable.) 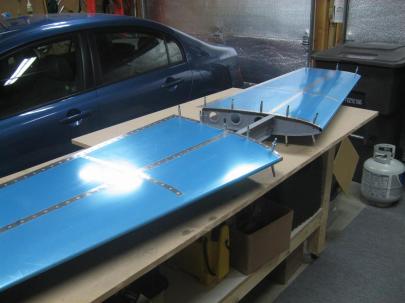 And after I flipped the HS right side up.

After a hard day’s work, I stood back and admired the almost finished product.

I need a bigger workbench.

1) Remove rest of blue vinyl from inside of HS.
2) Rear spar work.
3) Finish riveting holes in HS.
4) Figure out what is going to “fly” when I finish the HS.
5) Hang HS for storage

I also decided that I am going to keep a separate page for tips. I keep learning these little tricks along the way. I should write them down.

This entry was posted on Sunday, January 17th, 2010 at 5:55 pm and is filed under Empennage. You can follow any responses to this entry through the RSS 2.0 feed. You can leave a response, or trackback from your own site.