I was home at lunch today randomly (so I could pick up more propane for tonight’s planned grilling session), when I passed a FedEx Express van.

Hmm. That’s weird. Last Thursday, I got an email from Jessica at Van’s saying they had shipped my left spar back to me via FedEx Express, and it was supposed to arrive tomorrow.

Using some critical thinking skills (and the realization that I had NOT been diligently tracking my package over the weekend), I figured the FedEx Van was in the neighborhood for me. I flipped around and followed the driver back to the house. (It’s amazing how incrementally excited I got after each turn back toward the house.)

Anyway, the spar arrived, and it was, in fact, a new, undamaged spar. 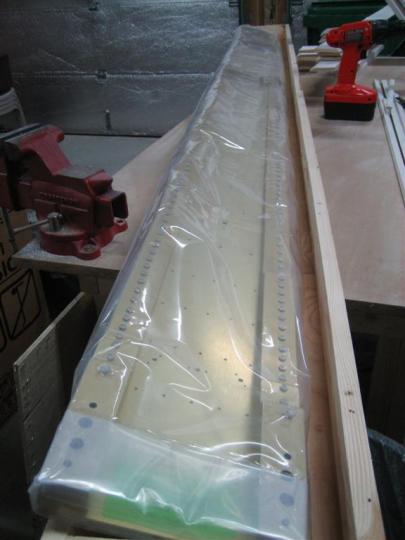 Came in its own cute little crate. 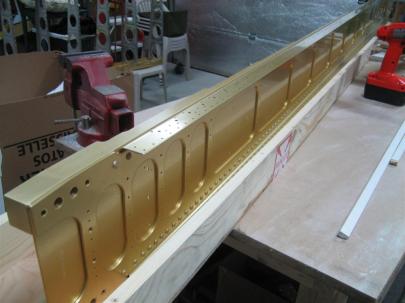 I didn’t post a lot about my left spar before, because I wanted to see how it would end up before posting to the world, but here’s a quick summary. My left spar, as received in the wing kit, had a pretty small dent in the lower inboard flange. While it was probably airworthy, I was concerned that I didn’t know how much margin on top of limit load I had lost (if any). Also, would there be any residual stress in the area of the deformation, and what long-term stress cracks should I anticipate based on this dent? Do I have to disclose this damage if I ever sell the airplane?

(Philosophical question: If you could quantify the new margin, and a spar was good to a known 8.5g instead of 9g, and you were still limited operationally to 6g, would you accept it? I still don’t know the answer to this. I think an 8.5g spar would meet the design intent of the airplane (but Andrew! what about 8.4g?!), but what if I accidentally over-g the airplane, something breaks, and I am falling helplessly to the ground. With a “perfect” spar, at least I know it was all my fault. With a dented spar, I’d be cursing Van’s the whole way down.)

(Dear Mom. There is no way I’ll ever over-g the airplane. Stop worrying. It was just for discussion purposes.)

If we could quantify what I’ve lost if I continue to build with the damaged spar, I may be okay to proceed with enough residual margin, but I have a hard time putting a spar in my airplane knowing it isn’t perfect structurally and not being able to quantify what I’ve lost. For the record, I’m an engineer… this has nothing to do with the small scratches and scotchbriting everyone has on their spars. I’m talking about material deformation.

Anyway, Gus and I talked (about loads…bending, drag, torsional, etc., but I’ll leave that out of here for now), and they really don’t have the capability to do an analysis on a spar flange like that, so he agreed to send me a replacement spar if I could send the other one back. (They can do an ultimate load test on a completed wing, just for future trivia.) Luckily, since this was shipping damage, ABF has picked up the shipping tab. (ABF customer service was less than optimal).

I feel a little guilty about standing ground about the damaged spar, but I think some of that has to do with work (if a spar had come into work like that, we would have either immediately rejected the part and sent it back, or performed enough engineering analysis to deem it acceptable as-is or with a repair). I want to be able to take my airplane to +6/-3 Gs and not always question whether my margin is the same as everyone else’s.

(I’ll leave out the more philosophical discussion about whether the margins on top of the posted limits are equal given the widely-ranging construction practices and skills that appear to be out there in the build community. I have to assume the airplane is designed to fly with plenty of margin after being built by a below-average builder, but can still pass Tech Counselor and DAR/FAA inspections.)

Ultimately, Van’s did a great job managing my concerns and communicating quickly and effectively about the whole problem. I really do appreciate their commitment to customer service, and their willingness to listen to my engineering concerns about the defect.

This entry was posted on Tuesday, September 21st, 2010 at 1:07 pm and is filed under Wings. You can follow any responses to this entry through the RSS 2.0 feed. You can leave a response, or trackback from your own site.