The plans have you skip 5 rivets on the top only, but the clecos were doing such a good job of holding the skin off of the table, I decided to skip those rivets on the bottom, too. Also, I only squeezed every other rivet on the tip until I can get the rear spar riveted in. Then, I’ll finish the whole thing off. 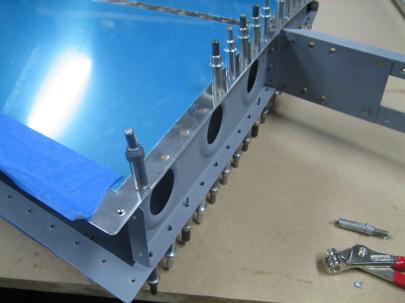 On the top of the skin, Van's has you leave the rearmost HS-405 hole open, then every fourth rivet forward of that. Here are my first three squeezed AN426AD3- rivets on the project.

Bad picture, but the rivet at the top of the picture is not going to be long enough to form a good shop head. 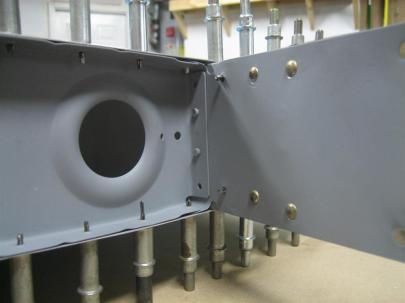 Then, I spent a few minutes looking over my work from yesterday. It generally looks pretty good, but I must have been distracted during these three or four rivets (at least they are on the bottom of the skin). Not a big deal, but when you look at it in the right light, you can see some small dings. 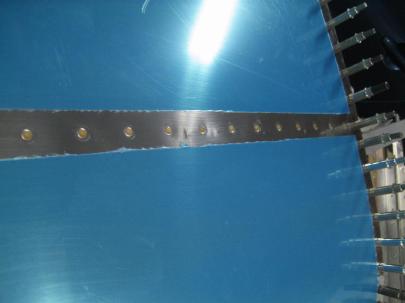 A couple small smilies and dings. These make me want a swivel flush set. Hmm. It looks like I didn't keep the rivet gun straight. Bummer.

From today, two of the rivets I squeezed didn’t sit correctly in the dimple. They are probably just fine, but I’m going to replace them. (I know, I know, they will be under the empennage fairing, but still, I want them better than they are.) 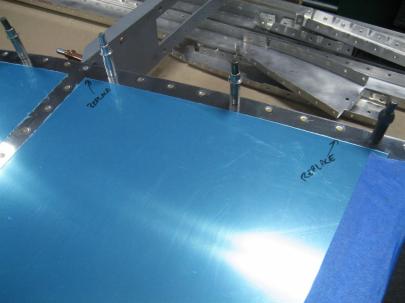 Only two rivets to replace tomorrow. Better than yesterday's average.

30 quiet minutes today, after the girlfriend and puppies went to bed. I’m so sneaky.

38 rivets tonight, 2 I’ll have to drill out tomorrow, but don’t count against my batting average tonight.

This entry was posted on Monday, January 11th, 2010 at 11:59 pm and is filed under Empennage. You can follow any responses to this entry through the RSS 2.0 feed. You can leave a response, or trackback from your own site.