Well, before I can dive into the wing, I need to finish up the trim tab. All that’s left is to fabricate two riblets, get everything prepped and primed, and then rivet the tab together.

First, let’s get some riblets made up. Just like the elevator riblet, I started with some thick paper. 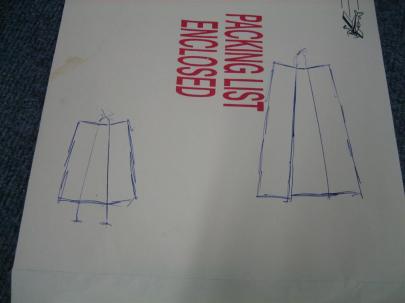 I used the packing list envelope from the wings, because it was literally right in front of me when I started.

I got the larger one cut out of 0.025″ aluminum sheet pretty easily, and the first try fit like a champ. I moved on to the smaller one, hoping for similar luck.Fast forward a couple minutes (many minutes!)…

Can you say "third time is a charm?"

Nope. Third one wasn’t good either.

That one worked. And of course I forgot to take a picture.

I drilled a couple holes in each riblet through the skin.

Finally, fourth time is a charm.

Wuhoo, let's get this tab finished.

But, it was getting late, and there were a couple of puppies somewhere that needed attention. (Turned out, they were asleep when I went inside, and I got growled at. Thanks, puppies.) Before I headed inside, I disassembled the tab and pulled out the wing spars to inspect.

After looking the spars over, I found many places where the spars had been “polished” with a scotchbrite bad to work out small scratches. It seems that everyone has these, and is no cause for alarm.

On the other hand, I found some bad juju. This is a closeup of a couple dings that look like something bounced on the spar. Keep in mind, that hole is a #40 (3/32″), so these are really small. 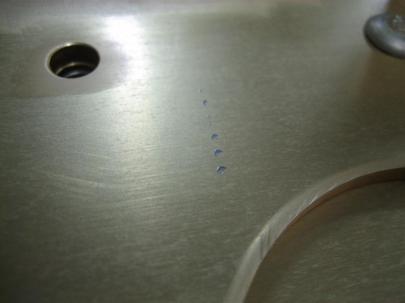 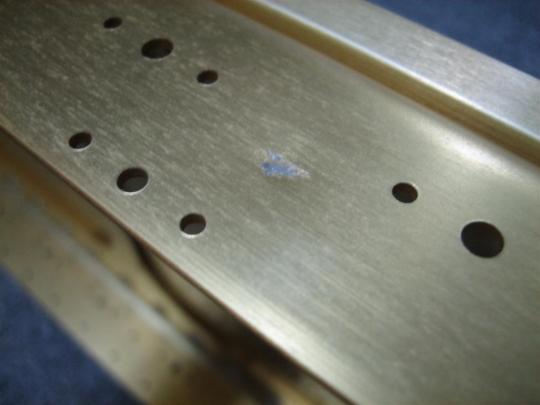 Holy frijoles, Batman! That is a huge dent in my spar flange!

Here's a closeup of the dent with a straightedge held over it.

I took a couple pictures of the underside of the flange. I tried to use the light to demonstrate the distortion.

That curved white streak is actually the light reflecting off of some spider cracks in the anodizing.

Not really related, I just snapped a picture of the spars laying on the table.

At least they look pretty.

1.5 hours on the trim tab today. I’ll email Van’s first thing in the morning about the spars and then post what they say.

I’m pretty disappointed though. Nothing could create that dent without making a big noise, maybe something being dropped or falling over. Which means someone probably knew it happened and didn’t say anything, or the inspection process didn’t catch it. Either way, I’m not super excited. I’m guessing it wasn’t Vans’ fault, but hopefully they will make it right.