The Case of the Missing Scarf

Today, I had a day off work. This was excellent news because:

2) The airplane needed me to have a day off work to get some stuff done.

Really, there are only a few things left on the right wing before I can call it complete and catch the left wing up. The lower outboard skin, inspection covers, pushrods, and wingtip. I’ll probably wait until both wings are complete to do the pushrods and wingtips.

That leaves the skin and the inspection covers.

Here’s the lower outboard skin, just kind of hanging on the wing (makes for good storage). 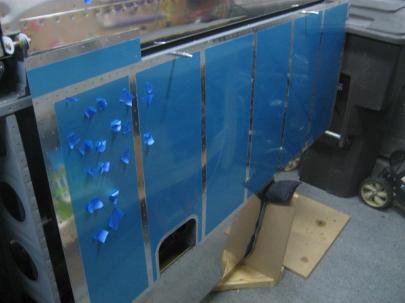 Also, You can see I kept my extra pieces of blue tape here while I finished the inboard skin.

After pulling the skin off, I realized that I already prepped the skin through deburring and scuffing the inboard side. Nice!

Already scuffed. (If you look at the date of the linked post, it was February….of 2011. Ouch.)

I guess you also get a closeup.

Anyway, I got the C-Frame out again and dimpled all the holes. 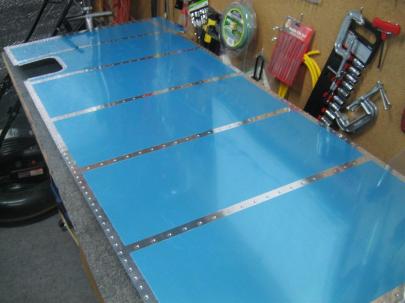 I did not dimple the wingtip attach holes. Haven’t even thought about those yet.

After dimpling, I cleaned the skin, took it outside, and got it primed between rain showers.

Back in on the workbench, it’s drying.

I still like doing the blue vinyl stripe trick.

Then, I did the same deburr/dimple trick on the remaining spars.

You can see my conduit and wire-pulling string, also. 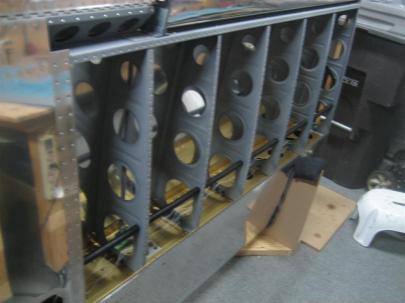 I guess this is another angle.

Okay, primer is dry. Let’s pull off the blue vinyl before getting the skin in place.

All the bays. Man, those clean lines look good.

Oh, almost forgot to mention. Anytime you have a lap joint with two skins, don’t forget to use the edge roller to put a little kink in the edge. It helps lay the edge down when the two skins are pulled together.

Here’s a good shot of how the skins lay on top of each other after rolling a bit of the edge. 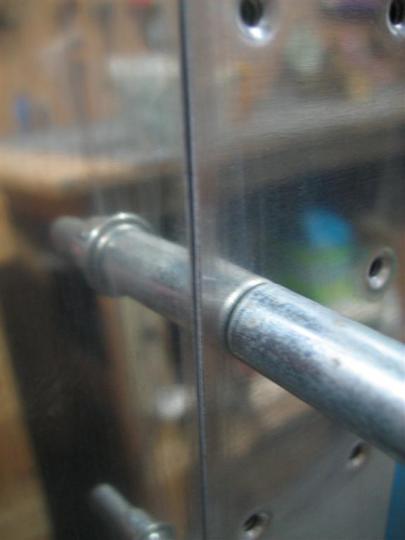 After that, I didn’t think there was anything else before getting started. (I’ll come back to this.)

Getting the skin clecoed on.

After getting the first bay riveted, I realized I had forgotten to bevel the two skin edges like I had on the upper skins.

So, here’s my plan: leave it alone. The  amount it sticks up is minimal, and the bottom of the wing is less critical than the top (so says physics). I’ll either remember on the left wing, or do it the same so they are symmetrical. I’m going to go talk to our super-smart aero guys to see if there is any real concern.

After the first bay…

Then, with much straining, pulling, pushing, stretching, etc. I managed to get the second bay done, too. 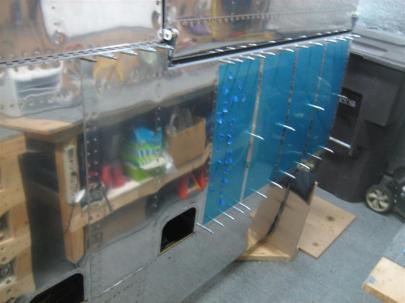 To help you see what I’ve completed, I pulled the blue vinyl off where I’d finished. 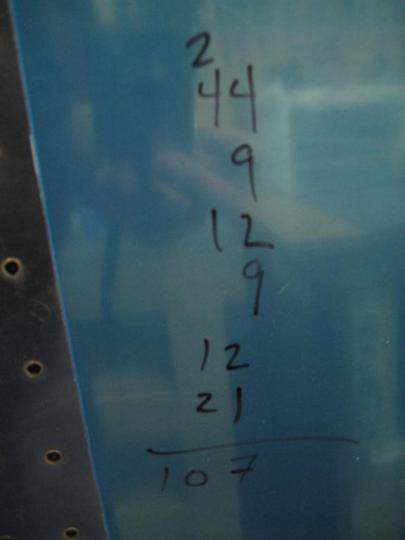 Counting rivets, that two at the top is a “carry-the-two.”

Taylor, get your butt over here so we can do some more.