Hey, look at that!

We’ve got some major visible progress going on here.

Cousin Taylor came over today and we got the rest of the right wing lower skin riveted. 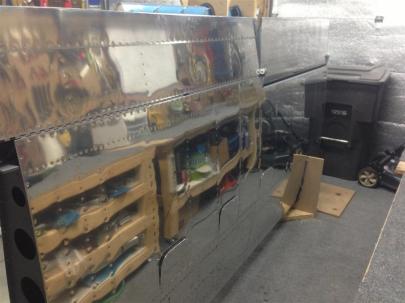 You get a landscape version, too.

It feels pretty good to have the right wing skinned. All that’s left now is some inspection ports, the pushrods (which I’ll probably postpone until both wings are done).

After that, I’ll get started on the left wing.

If I break down the hours so far:

HOWEVER. Some of this work (aileron, misc wing, spars) was some left wing work, too. I’m going to estimate time to finish the left wing as Ribs (18.0), Wing (79.0), and tank (46.0) hours. That comes to 143 hours remaining on the left wing. I’ll probably go a little faster than that, but this is a good estimate, and puts me around 550 hours when I’m done with the wings. That sounds about right.

This entry was posted on Sunday, November 18th, 2012 at 6:30 pm and is filed under Wings. You can follow any responses to this entry through the RSS 2.0 feed. You can leave a response, or trackback from your own site.