Alright, another night in the workshop. And, tonight was a super-night. Not because I’m super-rv7-builder (I am), but because my cousin Taylor came over to learn about the airplane.

After a little talking, I put him to work.

First task, empty out the LP4-3s that just arrived from Van’s (my first airplane package in awhile) into one of my empty yellow bins.

Not off to a great start, Taylor.

He quickly started exceeding my expectations though. To get going on this flap, the next few steps are tedious, but the two of us working helped to lessen the pain.

After showing him each of those “d” activities, We stuck the skin outside and proceeded with my new non-psycho masking prime job.

(If you remember from a few posts (months) back, I’m only going to do the straight-line vinyl trick with areas where someone can see. Parts that are closed off will get this treatment.)

Priming along the rivet lines.

Next up, the same trick on the interior ribs. 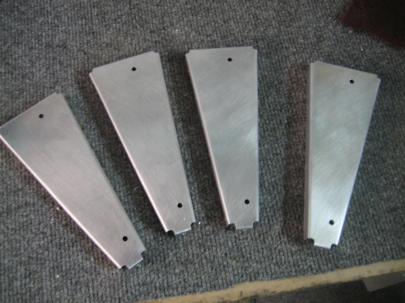 It started to get dark out, and I needed the flash. Sorry.

Then, so we could end on a high note, we studied the plans a little, read the instructions (a novelty!) and started clecoing everything together to get a sense of how we should assemble this flap.

Here, the ribs and spar are clecoed to the lower skin to lock everything together.

Flipped over for some more clecoing.

We decided we could start by grabbing the four AN470AD4-4 rivets at the aft end of each interior rib. 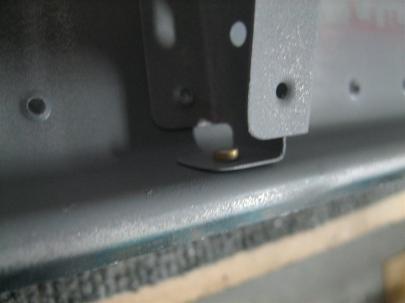 One of Taylor’s (damn, looks better than mine!) 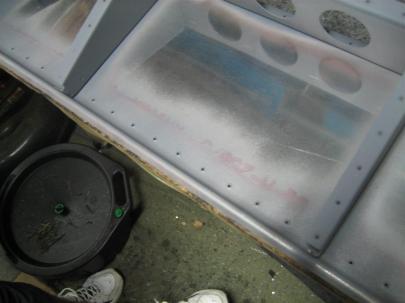 Just to prove he was there, I took a picture of his toes. (And an airplane part.)

Since he was so productive and really saved me some time, I’m going to count his hours as straight hours.

I know 4 hours per week won’t be super speedy, but it’s a hell of a lot better than I did between January and July of this year.

This entry was posted on Wednesday, July 25th, 2012 at 9:54 pm and is filed under Wings. You can follow any responses to this entry through the RSS 2.0 feed. You can leave a response, or trackback from your own site.