Well, after receiving my “install only” leading edge landing light kits from Duckworks, I was kind of eager to start fiddling with something other than rib preparation.

Today, I opened up the kits and started in on adding the leading edge landing lights.

This is from my design page, where I’ve been collecting ideas for stuff (I was originally planning 2 small MR16 (2″ sized) lights in each wingtip, one taxi, and one landing):

After reading a little more, I’ve found that people who do the two lights in each wingtip dance aren’t happy with the amount of light they are getting from their landing/taxi lights. Then, I figure out they are talking about the regular halogen bulbs provided with Van’s wingtip light kit.
The people who are using the HID wingtip lights are generally very happy with the light output.

November 2010 update: After even more reading, I’ve decide that the leading edge light is really the way to go.

Now, I think I am going to put a single HID (PAR 36 style) in each leading edge for landing lights. These won’t wig-wag.

Then, I’ll use the wingtip lights for taxi/recognition, with wig-wag. I can use the smaller MR16s in the wing, and point one set wide, and one set toward the centerline. If I use regular halogen bulbs in these, I won’t have to use a warm up circuit, which is good, considering that when up at cruise and ATC calls with a traffic alert, I’ll be able to immediately start wig-wagging them for recognition. That gets rid of my need for an automatic warm up circuit (won’t be using HIDs for wig-wagging).

I’ll figure out the mechanics of the wingtips taxi lights later (single light in each wing? 2 MR16 halogens in each wing?)

Anyway, I made the decision to go with the dual landing lights in the leading edges. I plan on flying at night, and I want the most light possible.

From Duckworks, I ordered two of the round install kits, and two H3 enclosures (spot, instead of flood). I could have ordered one spot (for landing) and one flood (for taxi), but since I’m going to do something in the tips for taxi, I want both of my leading edge lights for landing.

Anyway, here are the two kits. Very obvious are the two mounting plates, the bulb retainer, the lens retainers, a bag of hardware, and the leading edge lenses.

Duckworks was kind enough to send me a spare lens. Much appreciated.

Here are the two PAR 36 style, spot enclosures for an H3 bulb. My soon-to-arrive HID kit should have H3 bulbs that will fit nicely in here. I’ll do a separate write-up for those.

I left the bag on them to prevent getting any skin oils on them. 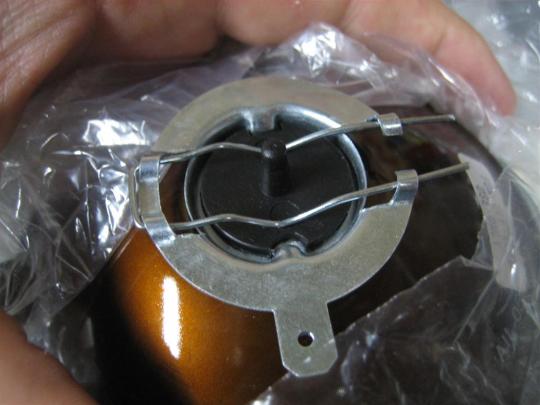 A closeup of the H3 part of the enclosure. I had never seen one before, so this was a learning experience for me.

Also included in the kit are the instructions, an exploded view, and the templates for the cutting and drilling.

Anyway, I decided to just bite the bullet and cut into the leading edges. Here is the template with the middle cut out.

First, I cut out the rib template and used a sharpie to mark the hole locations.

Exact positioning here isn't too important because the holes in the mounting plate are huge, and you can adjust these a fair amount.

Back to the cutout, I measured the 2.5″ from the edge of the cutout to the row of rivet lines.

Special note here, I cut the paper off on the left edge of the following picture so I could leave the ribs clecoed in. This just meant I had to measure from the cutout instead of using arrows on the side.

I also measured per the plans (18.75″ from the aft edge of the top of the leading edge skin to the top part of the opening here) and taped everything in place.

Tracing with a sharpie. 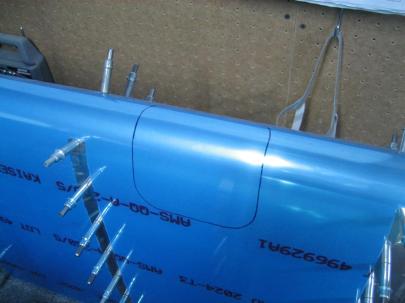 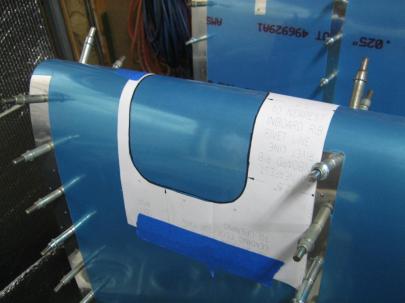 Before jumping into the actual cutting, I moved on to some of the metal preparation for the other stuff. I wanted to be able to cut the leading edge openings while the primer was drying for some of these smaller parts.

Here, I’ve run a #40 bit through all of the nutplate attach holes and enlarged the middle holes to 5/32″ per the instructions.

Then, I clecoed all 4 pieces together to countersink the nutplate attach holes for regular AN426 rivets. I could have used “oops” rivets here, but the lens retainers are thick enough that it wasn’t necessary.

4 lens retainers, clecoed together to give the countersink guide a good path.

I forgot to take any pictures of the rest of the prep for the lens retainers, lamp retainers, and the mounting plates. Anyway, they got prepped, cleaned, dried, and taken outside to prime.

I headed back in and got out a variety of dremel tools to cut out these openings.

There’s no turning back now.

I started near the bottom (least visible) and very far away from my line. As I gained confidence, I moved closer to my line (less finishing later).

Yikes, that's not a pretty cut. 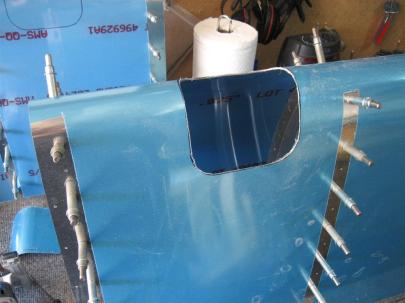 After a little cleanup, they look a little better. Still need to do some final cleaning.

I didn’t take a picture of the other cutout, but it turned out equally as well. A lot of people really stress out about cutting these holes.

I can see where they are coming from, but I think the leading edges are great with these light openings in them. (I’m going to look like a 747 coming down final, which is exactly what I want (visibility and recognition).)

Pretty leading edges. (Oh, and this was the first time in a long time I've been able to work with the garage open. It was almost 40°F today!)

Okay, back to the primed parts. I had the urge to set some rivets today, and I nailed all of them. I finally feel like I’m starting to get into a groove (although squeezing really isn’t that hard.)

Here, I’ve clecoed the provided nutplates to the lens retainers.

Ready to start some riveting. 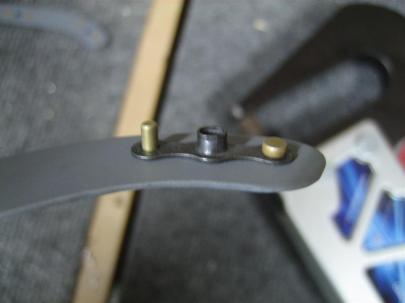 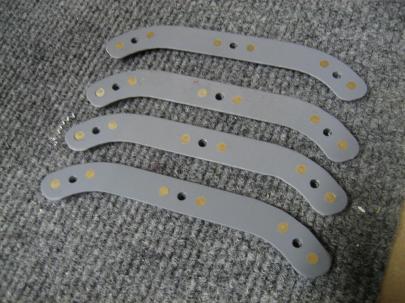 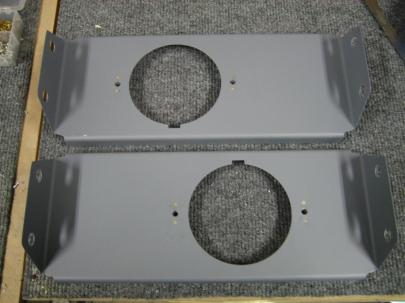 I got out one of the bulbs and just placed it in the mount just for kicks. 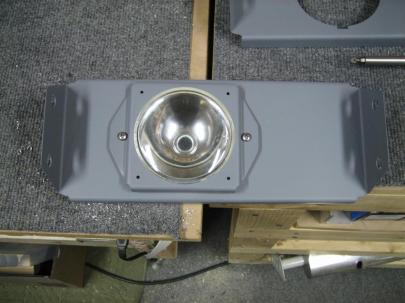 Found the screws and actually screwed them in. These things are going to look awesome.

Finally, I found all the pan-head screws and lightly screwed them in place.

I don’t think I’ll do any further painting of these. I like the primer grey.

I’ll do some more on the landing lights soon, but for now, I need to get back to rib prep. Hopefully this week I’ll have a writeup of the HID kit that arrives.

This entry was posted on Sunday, January 16th, 2011 at 2:27 pm and is filed under Wings. You can follow any responses to this entry through the RSS 2.0 feed. You can leave a response, or trackback from your own site.