I realized today that tonight is the anniversary of N999ZA. Yup, it was exactly one year ago today that I picked up the empennage kit from the FedEx facility here in town.

After today’s work, I have 199.0 hours on the kit, having set 2639 rivets and drilled out 205 rivets. (Only two parts re-ordered, but I haven’t reordered my “dropped rudder” stuff yet, so that number is going to go up.) I thought I would have more hours on the kit and be a little further (I assumed 6 months for emp, 1 year for wing, 1 year for fuse, 1 year for finish, and 1 year for avionics, engine), but I’m okay with where I am given all the other stuff I’ve been working on (first floor project, HA420).

At ~200 hours per year, and assuming it will take 1500-2000 hours, that leaves me about 6.5 -9 more years of work. (The girlfriend was not happy with this simple calculation, so I quickly explained that 200 hours per year was only for this year, and would only be true if I had an entire first floor worth of wood flooring to lay every year.) We both agreed it would be okay to speed up a little for the remaining (hopefully) 3 to 4 years.

Anyway, enough with the sentimental stuff.

Well, after finishing the left tiedown this morning, I needed to move onto another big step.I thought this afternoon would be a good day to start building my wing stands.

After a lot of thought and research, I decided I didn’t want the floor-to-ceiling kind. I wanted very sturdy floor stands. So, I started building.

Instead of the 4x4s,  I went with matched 2×4, turned around to cancel out any bow (although these are the “select” 2x4s, and they are damn-straight).

After screwing them together and cutting them into 4-foot lengths, here’s where I am. 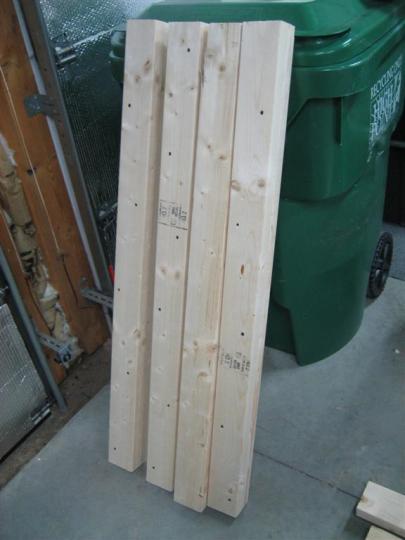 I also decided that I wanted to be able to work on both wings at once. I bought a piece of MDF from Lowe’s and had them cut it unto 4 equal 2′ by 4′ pieces.

I’ll put my two posts about 2 feet apart (so when the spar-supporting angles head out from there, I’ll have plenty of space to walk between the wings). This also gives me the right wing-to-wing spacing to fit everything on one side of the garage. 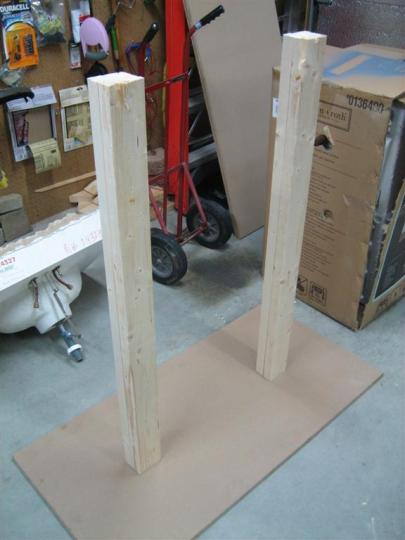 I really have everything in the garage, even the kitchen sink. (Ha.)

Oh, come on, that was funny.

So next I spend some time cutting some 19-inch supports. I used some trigonometry (wuhoo) to figure out that to fit on the 2-foot-wide MDF planks, I needed 19-inch support cut on the 45°. 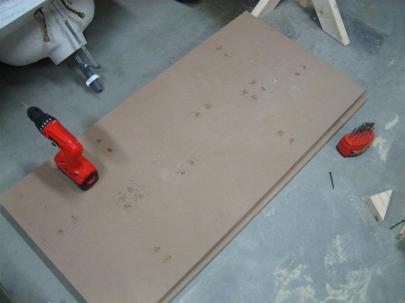 Here are the planks after being drilled for screws. 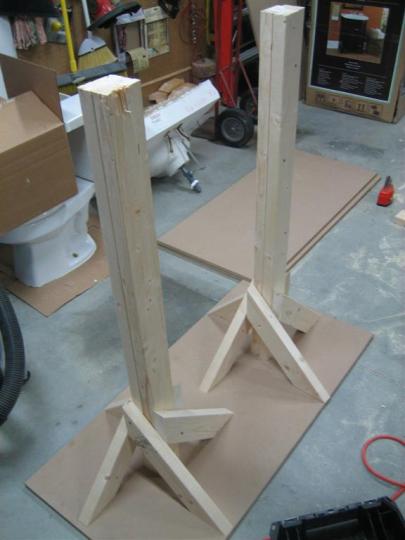 I'm not totally done securing the supports, but you get the idea. They are secured from the bottom (flush) and then into the posts. Plenty stable.

After another hour or so, I had the other set pretty much done. 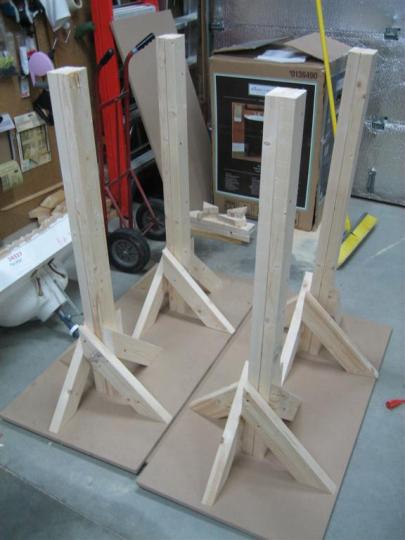 Again, I'll set each of these sets a wing-span apart.

This entry was posted on Wednesday, December 29th, 2010 at 5:00 pm and is filed under Empennage. You can follow any responses to this entry through the RSS 2.0 feed. You can leave a response, or trackback from your own site.