After getting a ton of housework done, I managed a quick half hour in the garage to finish up the nutplates on the left spar.

I took some pictures, but they are just like the ones from the previous post, so I’ll be short with the descriptions. 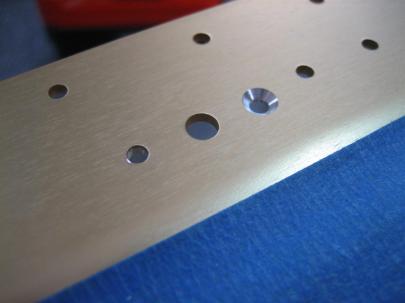 I found it a little quicker (and less tiring on the drilling arm) to do 4 at a time. I’d countersink four sets of holes for the nutplate attach rivets, then cleco one side of a K1100-08 nutplate in, squeeze the rivet, and then take out the cleco and rivet the other side in. Then move on to the next four.

I’m sure it didn’t actually save me any time, but for some reason it seemed quicker.

Just squeezed the first four rivets on this flange.

Nice looking shop heads, if I do say so myself.

Another angle, I guess? 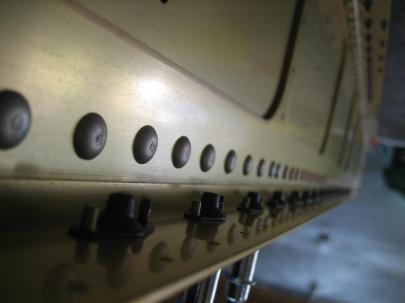 Put in the other rivet (man, I was really camera happy today...)

Everything was going great until the VERY LAST RIVET. 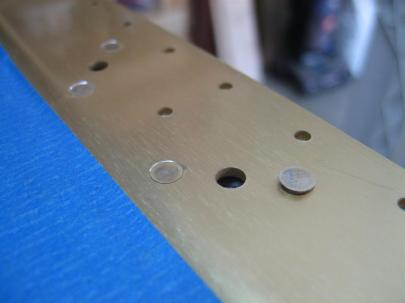 For some reason I lifted up the squeezer as I set the rivet. 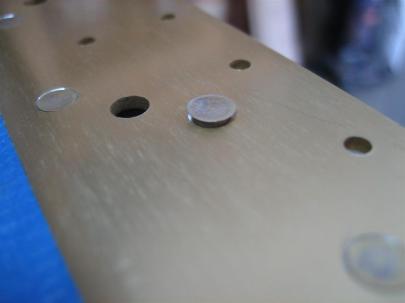 Another angle (except it's the same angle). Sorry.

After successfully drilling the rivet out. I was left with a crooked nutplate. Hmm.

I didn’t have a clamp small enough to hold the nutplate in place while I reset the rivet, so I grabbed one of the #8 screws (forgot the part number, sorry), and screwed it in gently.

Wuhoo! I think this is going to work!

(Screwed in gently) because I hadn't countersunk yet. This worked great. 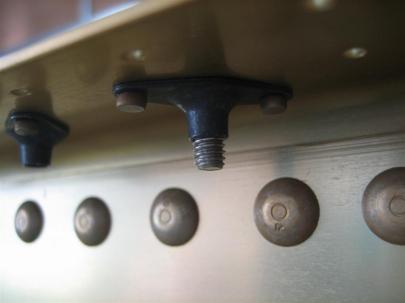 See, I told you it worked great.

Oh, and then I went for a run with the pups. (And by run, I mean rollerblade.)

This entry was posted on Saturday, October 23rd, 2010 at 5:00 pm and is filed under Wings. You can follow any responses to this entry through the RSS 2.0 feed. You can leave a response, or trackback from your own site.