Okay. Today was a pretty productive day. I had taken everything apart, then realized I still had some more fitting to do on the tab, so I put it all back together again. Before that, though, I thought and thought about what to do about the two holes on the right side of the picture. These are for the fiberglass tips, and they are supposed to be matchdrilled later, after the counterbalance skin is installed as a lap joint underneath. How can I deburr parts that are riveted together if I drill through both? Maybe it’s not a big deal, but I decided to drill them to #30 now (for #6 screws).

Two holes the right before drilling...

Then, I was thinking ahead about the safety wire trick you have to do with the hinge pin. Why not drill that now, so I can deburr before priming?

I drilled this just larger than 0.060, which is one of the biggest safety wire sizes.

Next, time to deburr and dimple the left elevator spar.

And after everything was dimpled, a nice picture down the spar of my blurry recycling bin, golf clubs, and motorcycle jack. (No motorcycle anymore, but the jack comes in handy to lift the corner of a car when a tire needs to be taken off for one reason or another.) 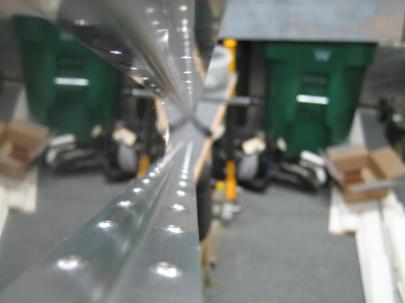 Spar! (I'm tired, so we are down to one word captions for the day.)

Another shot of the same. 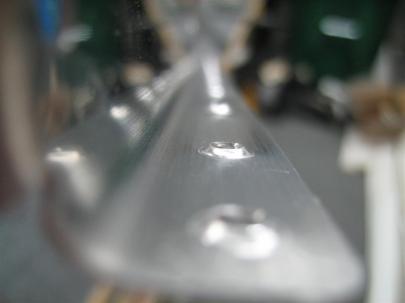 Dimple! (Wouldn't it be annoying if I everything I wrote ended in an exclamation mark?!)

After edge finishing the two hinge reinforcement plates, I shot them with primer.

Then, my attention turned back to the tab.  I’ve clecoed the elevator half of the tab hinge back in, and on the right you can see my drilled riblet!

Drilled riblet! (Okay, I've had enough of the exclamation points.....!)

Here’s a better picture. I basically drew a line perpendicular to the hinge line up from one of the holes along the trim spar, then spaced them at 1.5 and 3 inches. That spaced everything evenly, and gave me plenty of edge distance all around. 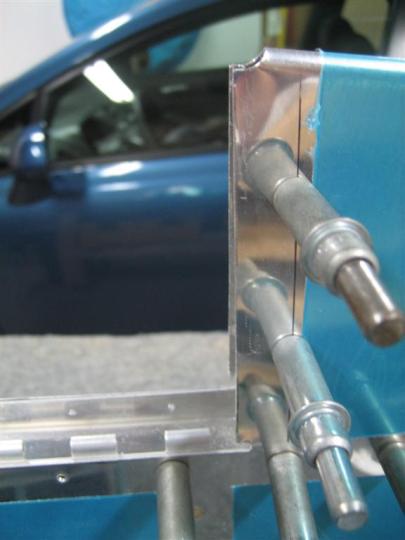 Don't look at my edges, they aren't finished yet, but you get the idea.

Then, I stuck the tab on and inserted the hinge. 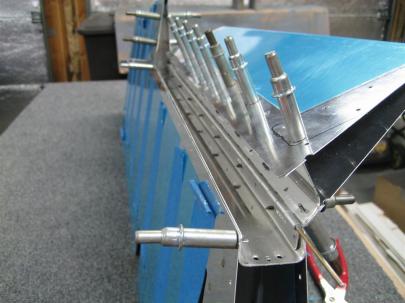 As some would say, "Easy Peasy."

Other direction, just for kicks (not as much deflection due to cleco interference, but again, you get the idea).

Because I bought a longer section of hinge to replace my bad first attempt, my hinge pin was long enough to actually fit (Van’s says they will send you the real one (because it needs to be longer than 18″) in the finish kit.

I got to bending.

After more bending, I ended up with something like this.

Ooh, isn't that pretty! The safety wire hole I drilled earlier is in the middle there, and will allow me to safety wire this hinge pin to the spar so it won't COME OUT IN FLIGHT!

Then, I figured out how to do video. They speak for themselves, but keep in mind that while my gap is intentionally small, I still need to edge finish, which will open them up.

Another video, this time a little closer. You can see I am pushing and pulling left and right to make sure there is no interference even with the small amount of play in the hinge. I think I am okay, but this will probably open up a little after edge-finishing.

This entry was posted on Thursday, July 1st, 2010 at 11:59 pm and is filed under Empennage. You can follow any responses to this entry through the RSS 2.0 feed. You can leave a response, or trackback from your own site.