Well, the girlfriend and I woke up at the butt-crack of dawn this morning to get out to the airport in time to get to Atlanta and back by noon for a Pilots N Paws rescue. If you aren’t familiar, Pilots N Paws is a not-for profit organization that basically provides a way for dogs in need of transport to be connected with pilots that can help transport them. Most requests are for relatively short distances, but sometimes, a few pilots will team together to do legs of a larger distance. See their About page for more details.

Anyway, if you are a pilot and are willing to get involved, go to the Pilots N Paws pilot sign-up page and get going!

If you aren’t a pilot, consider going to their donation page to make a small donation (it’s on the right side of their website). They’ll use it to buy crates and harnesses for pilots to use on rescues.

Okay, back to today.

After getting to the airport, I  got the airplane (Piper Arrow, PA-28R-200) pre-flit (past tense of pre-flight), and started loading up all of our stuff. Towels, blankets, water, dog treats, leashes, cleaner (in case our passenger had some motion-sickness), etc.

During loading, I grabbed this picture of the moon.

Wow, it's a pretty morning.

After getting out the camera, I decided to document all of the passengers on the trip. Here is the girlfriend, clearly happy about the time and temperature. 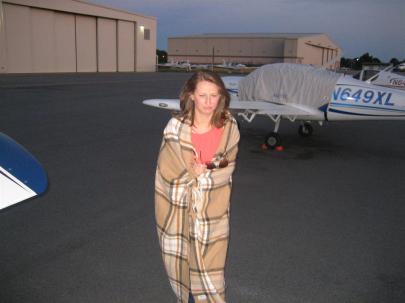 During taxi, camera duties were relinquished to the copilot. 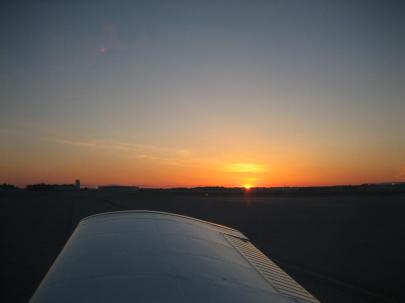 Not a terrible picture. Just kidding. I think this is going to be my windows background for awhile.

Heading southwest toward Atlanta (direct-to KPDK, or Dekalb-Peachtree airport), I grabbed this picture of Lake Norman, just northwest of Charlotte.

I love the light in the morning.

Even the wing looks cool with the backlight effect of the rising sun.

I caught the girlfriend trying to stay cuddled under the blanket, and I snagged this one just as she was showing some embarrassment.

That got me what I wanted.

Aright, time for a family portrait. This is a series of three (of about 10 that we actually took) pictures trying to do the whole “hold the camera back toward us” thing.

"I'm not looking at the camera. Do it again."

"Yes! Oh wait, YOU aren't looking at the camera. Do it again." 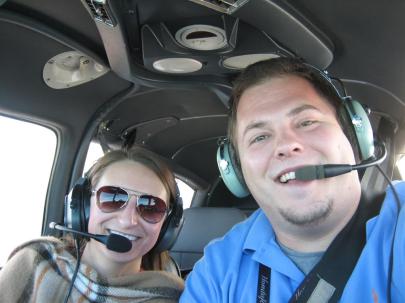 Soon thereafter, descent and landing at Peachtree was normal. Here we are taxiing up to Atlantic Aviation.

Atlantic! (Maybe they want me to fly her back in that Gulfstream.)

Inside, we met our passenger.

This 65-lb (really? she seems kinda small) Doberman female was between 4-6 years old, and had been surrendered as a stray. Given the size of her….ahem….mammaries, we are guessing she was bred. Animal control said she didn’t have any milk, which leads us to believe she had been bred so much that they eventually dumped her when she stopped producing.

She was so nice, though. When we walked in, she immediately came over and said hi, and was especially interested in the sealed bag of treats we had brought along. What great noses they have!

Anyway, all of the line guys had come inside to meet her, and they were having fun trying to name her. One of my favorites was Sassy (which she wasn’t).  We ended up calling her Dobie.

After taking a bathroom break and exchanging paperwork with Atlanta’s animal control, we took our new friend out to the airplane and gave her some much-needed affection.

While she warmed up pretty quickly to us, she didn’t love the camera…yet.

Dobie, the camera is over there.

Remember how I said she didn’t like the camera…yet? Not anymore. 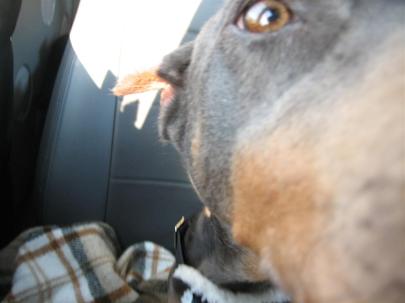 After startup and taxi (crazy complicated taxi instructions, even though it was “turn right at Bravo, taxi to 34”), she started looking outside. (The taxi instructions, while apparently simple, had us crossing two parallel runways and taxiways that were not well marked.)

Nope. Not curious at all.

After takeoff, the girlfriend managed this picture. Even though the airport isn’t in focus, I like it. 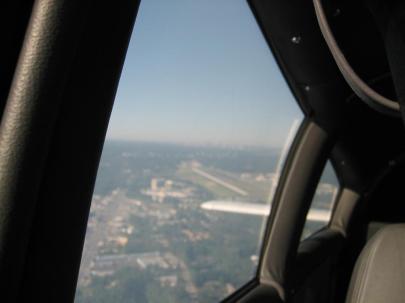 By the way, the Arrow has a brand new interior. Nice.

Some little mountain outside of Atlanta. 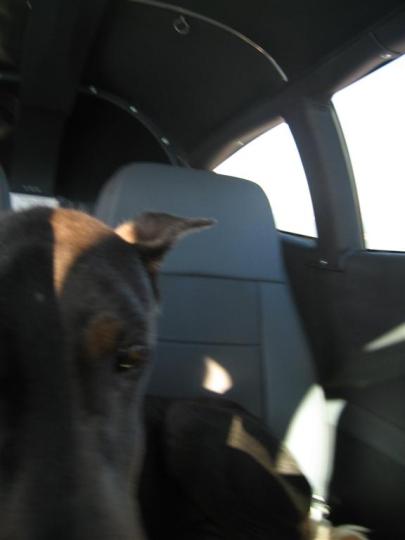 Now she loves the camera. 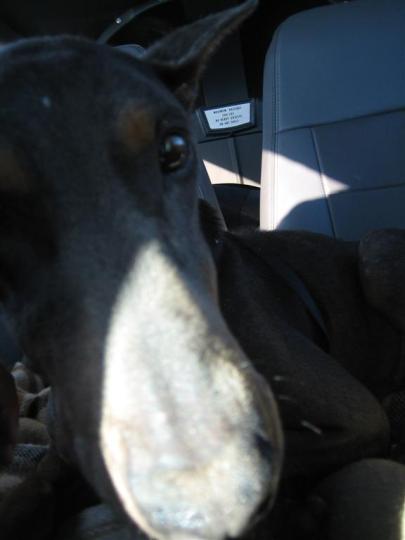 I tried to snap a few more self-portraits. 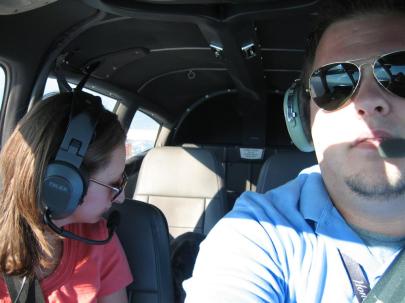 I'm not very good at this. (The girlfriend and Dobie really bonded, though.)

Aren't they cute together?

The actual flight was pretty boring on the way back. After about 30 minutes, Dobie fell right asleep.

Only upon descent into the airport did she wake up and start focusing outside again.)

We forgot to snap pictures after landing of the handoff to Doberman Rescue of the Triad (DRT), but everything went smoothly.

Last night, I got an email from the original requester for the trip, who had gotten some pictures of Dobie from DRT after she got a bath.

Happy as a clam with her new collar and after a bath.

So pretty. Someone go adopt her!

Now I gotta go finish my RV-7 so I can do this more often.

This entry was posted on Sunday, May 9th, 2010 at 11:45 am and is filed under Pilots N Paws. You can follow any responses to this entry through the RSS 2.0 feed. You can leave a response, or trackback from your own site.