What a great night in the shop tonight. And, the airplane actually forced me to get something done on the house!

After work today, I needed to stop by the Aviation Depot to buy some hinges, wood, and an 1/8″ dowel rod for elevator trailing edge bending.

Since we’ve been wanting to upgrade the hardware in our house for awhile, I decided to buy the nice hinges, and used the replaced hinges for my bending brake.  Here’s a shot of our powder room door, mid-installation. 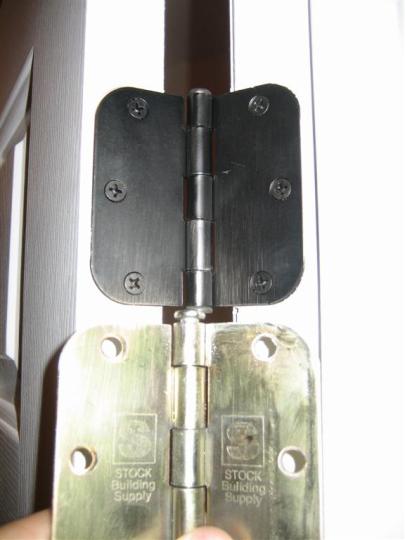 Anyway, after a ton of VAF research, Orndorff video watching, and builder website reading, I settled on the “other” method, which puts the hinges on the long face, and really only bends with the short side of the 2×4 (or 2×8 cut in half). You really only want that much bending the skin anyway, because the bend needs to occur locally at the radius, not away from the trailing edge. If the wood is imparting force in the middle of the skin, you will end up with the dreaded “bulge.”

Here’s my bending brake being assembled. I had six hinges, so why use them. I grabbed these 2×4, which were nice and straight, and just long enough for the trailing edge. I’ll need to replace these for the flaps and ailerons. I read somewhere they need to be more like 5 feet long for those.

Here it is after assembly. On the left, you can see my skin, that needs to be bent. In the middle, the three dowel rods I purchased. While I was standing in the store, 1/8″ seemed too small, so I bought a few different sizes at $0.50 each. Of course, everyone was right on, 1/8″ is perfect.

I’m going to put the trailing edge of the skin in the little opening at the bottom of the brake (as it is oriented in the picture).

First thing,  I screwed my bending brake to my 2nd workbench with one of the bending surfaces flush with the bench top. 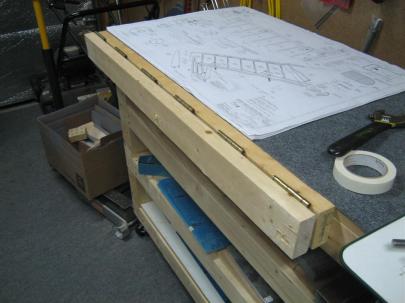 Then, I put the 1/8″ dowel into the trailing edge of the skin and taped it in place. (Not shown in the following picture, because I was recreating the process for the camera. Look 2 pictures down for the dowel rod.) Then, you put the skin in the brake all the way against the hinges, and start bending.

This is not a fast process. It takes a surprising amount of force. I thought it was going to be a one shot deal, but it takes a lot of bending. You start with the skin against the hinges, then bend around the dowel. That took a whole bunch of times (I was stopping a lot to inspect). Then, you move the skin a little away from the hinge, and bend again. This allows you to really form the edge around the dowel.

If you pretend there is a dowel rod in there, this would be the first bend.

Here’s where I could get to with the dowel rod in place. 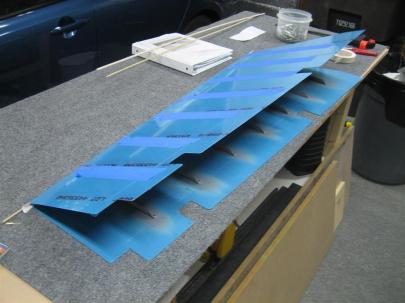 Then, you remove the dowel rod and keep going, same deal, but a lot more gently, because I didn’t want to squeeze the trailing edge too much (now there is no dowel rod to prevent squash-age.

I thought this was good enough, but this is about 3/4 the way there.

Of course, because I thought that was good enough, I clecoed the skeleton into the skin. 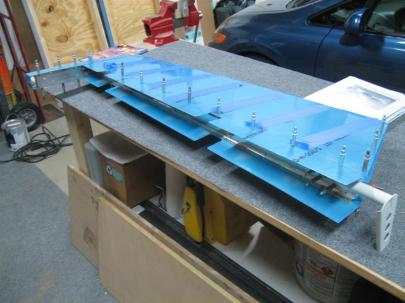 It’s starting to look like something that could be considered an elevator.

But, after grabbing my straightedge, I’m getting some “fall-off” before the radius. This happens because the radius hasn’t been formed well, and then you pull the skin down to the skeleton, and it bends close to the trailing edge. It’s not terrible, but I know I can do better.

It’s not the dreaded bulge, but it is some pretty good “fall-off.”

No good here either. 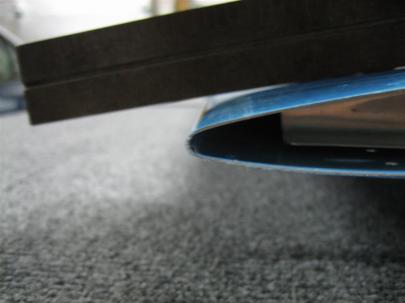 Near the inboard edge.

Hmm. I unclecoed, and grabbed this shot. I’m about an inch from where I need to be, and the tension I am putting on the skin to pull it to the skeleton is causing that slight bend near the trailing edge. 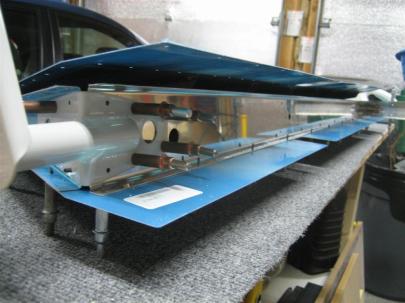 I put that bad boy back in the brake and kept going. This time, I used two BFPs (the “p” stands for pliers. I’ll let you figure out the “b” and “f”) on either side of the brake and finished it up nicely.

There we go. I made up that last inch, and now it rests right where the skeleton would go.

Much better. Perfect, in fact. 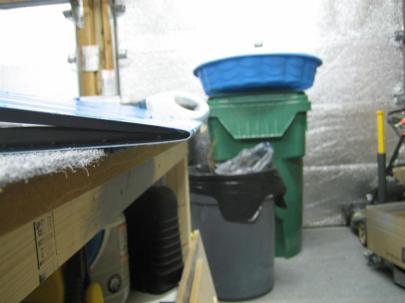 How great is this? A perfect bend.

Let’s get out the straightedge.

No fall-off before the radius.

Another place on the elevator.

And again, no fall-off. So happy!

After all that, I pulled the vinyl off of the outside of the elevator skins in preparation for deburring.

Hey! There’s shiny aluminum under there. Let’s start putting this bad boy together.

Total, it was two hours tonight, including bending brake construction. It was a great 2 hours though. I am extremely happy with the results. I have a perfectly bent trailing edge.

This entry was posted on Wednesday, April 28th, 2010 at 10:15 pm and is filed under Empennage. You can follow any responses to this entry through the RSS 2.0 feed. You can leave a response, or trackback from your own site.