All I had left to do after rolling and riveting the leading edge was finish up a few rivets in hard-to-reach places and then finish screwing in the rod-end bearings.

The hard-to-reach rivets in this picture are the top two. For the other side, my squeezer actually fit in here when the opposite side rivets weren’t installed. The shop heads prevented me from cleanly setting these, though, so I had to use a thin steel plate as a bucking bar. Worked well. 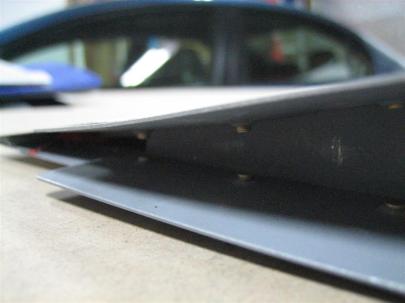 Here they are from the right lower side of the rudder skins. (I haven’t been using blue tape on the rudder as much and this is a mistake. I know it would have been a lot of blue tape, but it makes the skins look so much nicer. I will be using tape again after riveting to protect the skins.) I don’t think the rudder is going to end up polished, but I just hate the way those scratches look.

For the tip rivets (there were four that were hard to reach), I used a thin steel plate as a bucking bar for three of them, but then only had about 3/32″ clearance between the unset rivet and the shop head from the set rivet on the other side. I improvised by using a backriveting plate, the right rudder skin, then the already set shop head, then a screwdriver, then the unset rivet, then the left skin and finally a flush set. This worked out really well. 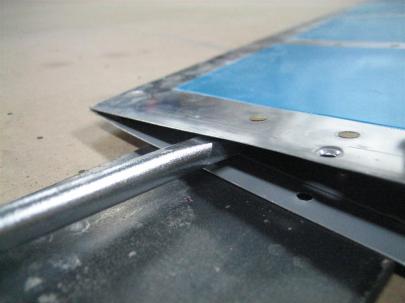 My setup for riveting the last (aft) rivets on the rudder top.

Here’s another shot with a flashlight assisting the digital macro setting on the camera. The point of the picture is the screwdriver, but it looks like I am going to have to replace that upper rivet on the right.

This worked well, but YIKES, look at that rivet on the right...also, the lower shop head doesn't look big enough. I'll get out the rivet set gage and test it.

Then, I turned the rod end bearings into the rudder by hand (I haven’t made the rod-end bearing tool yet), and with about 30 seconds of trouble, I figured out a great way to slip the AN3 bolts into the hinges of the vertical stabilizer with the rudder attached. 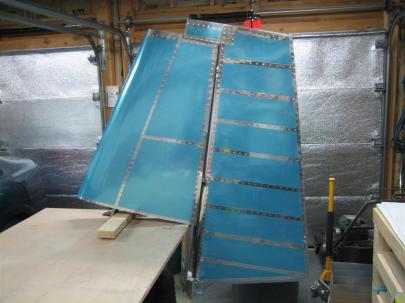 Sweet. This is an awesome step in the project. My first assembly. And it moves!

The bearings aren’t adjusted yet, and there are no fiberglass tips, but I’m so excited. More pictures!

A vertical picture. So nice...

I’m not sure if you can see it, but I have the internal rudder stop in there, too. (Although I don’t think it goes on the bottom hinge. I need to read up on it.)

And the requisite picture with Jack and Ginger.

Jack is a little skittish about being in the garage (where I usually shoo them back inside.) Ginger clearly didn’t like being out here either, so she was slowly scooting her butt up toward me trying to inch away from the airplane discreetly. Cute, Ginger. Cute. 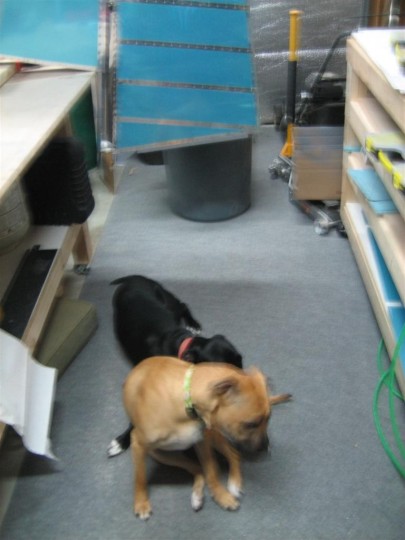 Jittery dogs. They would rather be in on the couch watching TV.

Okay, dogs, you can go back inside. 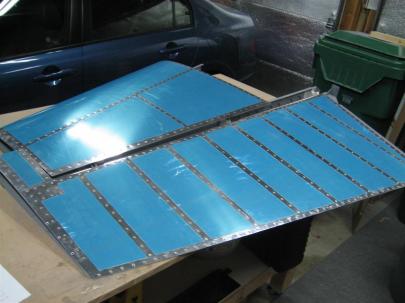 Finally, I laid the assembly back down on the workbench for night night time. I'll take these apart and store them again in a few days.

And at the end of the night, I looked down and had spent an hour on the project. Look at that, I’m at exactly 100 hours! Two big accomplishments in one night. (Also, ten rivets. Don’t want to belittle them by being more excited about the hours.)

This entry was posted on Monday, April 5th, 2010 at 10:16 pm and is filed under Empennage. You can follow any responses to this entry through the RSS 2.0 feed. You can leave a response, or trackback from your own site.