Jack and Ginger were a little neglected this weekend while the girlfriend and I painted the master bedroom. I’m sorry, guys.

Anyway, tonight was all about them, so in the middle of playing, napping by the fire, and running in circles around the house, I managed to calm them down enough to help with the airplane a little.

With the few minutes I had, I managed to set the 22 rivets that were hard to reach with the squeezer last Friday night. A few of them, especially near the elevator hinge brackets, were still hard, but I managed to get them all set, even if it was after drilling a few out. I also set the three AN470AD4-6 rivets that hold the rear spar to the root rib and also install the three LP4-3 rivets that hold the rear spar to the middle rib.  Here are the dogs, once I got the vertical up into the ski equipment room, umm, I mean airplane parts storage room, umm, I mean burnt orange room. 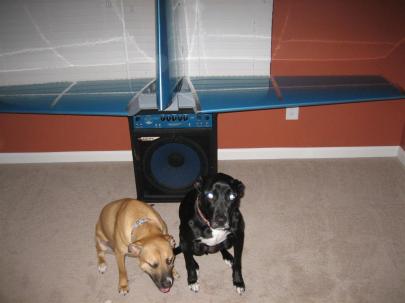 The dogs flew again. This time with directional stability!

They aren’t really happy about being in the orange room in general (it is off limits, so they are very good about not crossing the threshold), but especially not when they have to pose in the airplane. I know for a fact, though, that they will love flying in it when it’s done.

Jack's not very happy about posing. He's ready to go.Jack's slightly less uncomfortable the further he is away from the "shiny blue thing that makes loud noises." Seriously, I heard him describe it that way.

Ginger’s okay, though. Especially when there is a bone on which she could be chewing.

Jack's slightly less uncomfortable the further he is away from the "shiny blue thing that makes loud noises." Seriously, I heard him describe it that way.

Finally, one without the dogs.

There are still a few more things I would like to do to the vertical, like drill out a couple of rivets and reset them, and clean up some of the skin edges, but for the most part, it can sit inside while I press on. I can’t believe it took me 16.5 hours for the vertical versus 44.5 for the horizontal. I think I would recommend to other newbies to start on the vertical. It seemed to be a lot easier, but I don’t know if that was because I had done everything once already on the horizontal, or because it really was easier. Whatever you do, don’t take my advice, though. You’ll die if you do.

This entry was posted on Monday, February 15th, 2010 at 11:29 pm and is filed under Empennage. You can follow any responses to this entry through the RSS 2.0 feed. You can leave a response, or trackback from your own site.